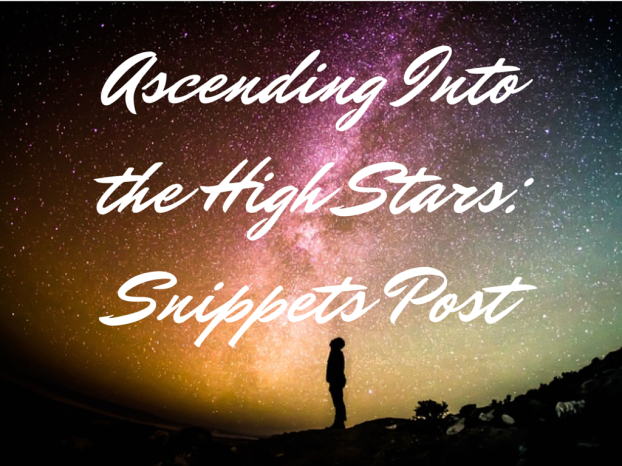 I have gotten a couple requests for snippets posts, and today seemed the perfect day, what with NaNoWriMo in full swing. The snippets are from three different projects of mine: a planetary fantasy, and two historical fiction, 1950’s Ireland and 1690’s England respectively.  Enjoy!

The barrista reached back and grabbed a tall coffee cup and a Sharpie. “Name?”

“No, Heaven.” She cleared her throat and indicated upwards. “Like the sky.”

The word Heaven was scrawled onto the cup. “It’ll be ready in a minute—you can have a seat if you like.”

“We do not want you,” he said, “and we do not want any such empty promises. I know Alta Fallek too well. Go home, and if I see your face again, I will order you shot.”

Lysander’s face, which had been a sullen mix of ceremony and duty, turned stubborn. “I cannot,” he replied. “I am bound by my country’s ancient oaths. I cannot return, or they will kill me.”

Over the noise of battle came again a long whistle, different in pitch from the first, and in the patches of clear, Heaven could see dogs swarming back, some limping, some bounding, and others crawling, trying in their dying moments to obey their master’s command. The Keeper of the Dogs himself was striding out to meet them, calling some by name, calling and calling them back….

Heaven watched and could not look away, though it tore her heart to look, as the Keeper went to his knees among his dogs, comforting them and praising them as they returned. At last he rose, dirty and bloodstained, the only clean places where tears had streamed down his face, and called the dogs who could return with him back from the front. “So many of you,” he was murmuring, shaking his head. “So many of you have not returned. So few remain.”

She glanced up from the page to see that the earth truly had slipped away—it was but a blue sphere far below them, and they were ascending into the high stars. She lifted her face to them, and they shone upon her warmly as if crying a welcome. And somehow, she felt that they were familiar friends—like one’s own constellations, not remote and unknown. But then—she caught her breath sharply—a scent came to her on a faint wind, like spring after winter and clear air and sunshine. It was the smell of home.

Policeman Shaw strode grimly over to Ian with the air of one about to reprimand a child for the same sin he has committed over and over.

“Tiernay, I should lay you out,” he growled, shaking his head. The waiter beat it back to the pub, and Egan stood waiting awkwardly for the confrontation to be over.

“Hand me the wallet.” Shaw’s large hand sat outstretched, waiting. Hastily Ian fumbled in his pockets and drew forth a plain brown wallet. The policeman took it and looked inside. “This is Liam Kane’s,” he replied sternly.

The hapless wallet was tossed onto his desk behind him and the hand stretched out again with unyielding firmness. Egan could tell Ian was growing more anxious. Sweat began to trickle down the man’s collar as he rummaged again through his pockets. He pulled a wallet out briefly but with a murmur of, “Oh, that’s mine,” he thrust it back in. At last he found a black one in the pocket of his coat and yielded it up.

At the bottom, he held up the lantern and stood frozen, unable to speak. About him lay boxes upon boxes of brand-new guns, the shipping labels from America still on some of the crates. He had only ever heard rumors of such things—yet there was no question about these. These were smuggled IRA guns.

It was drizzling in the street: not enough to soak a man, but enough to make it hard to see, and thunder growled outside of town, making hearing hard. It was a bad night to catch a spy…. Almost without thinking Egan set his hand on his gun as he walked, running his long fingers along the barrel and hoping that he would not need it—hoping that he would not be followed in the first place.

His hopes were disappointed.

“The navy? The navy? Do we look like we are in the navy? Poor pressed souls, in uniforms and under hard captains—no, we are not in the navy.”

Gunner Sweet, looking more than done up in his going-ashore clothes, his hair and beard brushed exquisitely, went over to Lindsay and crouched down beside him.

“Say, you haven’t a ring I could borrow, do you? I need one badly.”

“A ring?” Sean’s hand went instinctively to his chest. “Now what use would you be putting a ring to so hastily?”

“The usual thing rings are meant for.”

“Have you any of your own?”

“Alas, no. I sold mine to a jeweler in London.”

“I did not want them then. I have a most particular use for one now….”

No sooner were the words out of his mouth than a cannon blast tore through right where he was walking, with a roar so deafening the memory of it would stay with him his entire life.

For a moment everything was shaky before his eyes, and he gripped the mast with both hands for balance. Then everything cleared before his eyes and the shaky dizziness went away, leaving him speechless at the sight before him. All around, as far as his eye could see, was vast blue: the sea deep and majestic, spreading out endlessly like a plain, and the bright, shining blue sky like a great canvas all about and above him, and set in it, like a blinding jewel, the sun.

It was Nicky who put it into words. “Isn’t it glorious!” he shouted over the warm, brisk wind, with a smile born of wonder that could not be contained.

9 thoughts on “Ascending Into the High Stars: Snippets Post”